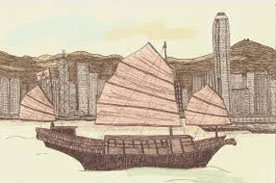 Junks were originally developed during the Han Dynasty (220 BC-200 AD).

They incorporated numerous technical advances in sail plan and hull designs that were later adopted in Western shipbuilding.

The historian H. Warington Smith considered the junk as one of the most efficient of ship designs:
"As an engine for carrying man and his commerce upon the high and stormy seas as well as on the vast inland waterways, it is doubtful if any class of vessel is more suited or better adapted to its purpose than theChinese junk, and it is certain that for flatness of sail and handiness, the Chinese rig is unsurpassed." 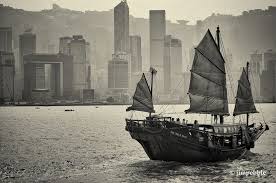 The structure and flexibility of the sails make the junk easy to sail, and fast since the sails are not square rigged, i.e. they can be angled when sailing upwind.
The sails are cut elliptically and slightly curved with bamboo inserts (battens), giving them the shape of an airfoil, and permitting them to sail well on any point of sail. The sails can also be easily reefed and adjusted for fullness, to accommodate various wind strengths. The battens also give the sails added strength, and make them more resistant than traditional sails to holing or rot. Junk sails have much in common with the most aerodynamically efficient sails used today in windsurfers or catamarans, although their design can be traced back as early the 3rd century AD.

The largest junks ever built were probably those of Admiral Zheng He, for his expeditions in the Indian Ocean. According to Chinese sources, the fleet comprised 30,000 men and over 300 ships at its height.
Chinese junks were used extensively in Asian trade during the 16th and 17th century, especially to Japan, where they competed with Japanese Red Seal Ships, Portuguese carracks and Dutch galleons.
Junks remained considerable in size and played a key role in Asian trade until the 19th century. One of these junks, Keying, sailed from China around the Cape of Good Hope to the United States and Britain between 1846 and 1848. She testifies to the power of Chinese shipping and shipbuilding at the time of the beginning of industrialization in the West.

DUK LING was build in Macau 50 years ago and served as a fishing boat until she was bought by FrenchmanPierric Couderc in 1985. He spent almost three years restoring her to her original glory and Detours Company bought her in 2005 to spread the history of Hong Kong.